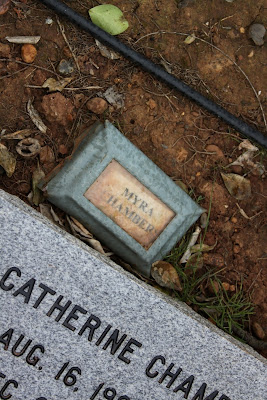 This is curious. We have a temporary marker and the permanent marker sitting off to the side of the cemetery along the fence with the other misplaced stones. Why is this? 2007 is not long enough ago for the cemetery to have misplaced Myra's remains.

Myra was loved. She was probably a mother, a grandmother, maybe a great grandmother? She lived 98 years. Apparently she was a Registered Nurse, so she cared for others. Why, barely three years after her death, is her grave marker set aside with the other misplaced stones?

Her obituary ran in the Sacramento Bee on December 9, 2007. Without paying the obituary archive service, I can read the first line: "CHAMBERS, Myra Catherine Died on December 6, 2007. Myra is survived by her grandson Michael Brian Chambers, devoted friend Dennis John Huber, and son John." 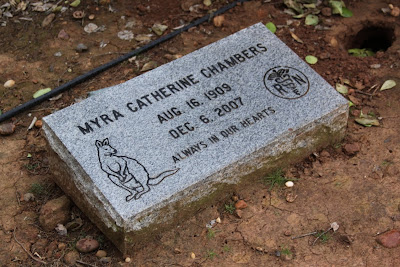 Posted by Graveyard Rabbit at 6:58 PM